This homemade barbecue sauce recipe is my husband’s creation, and I think it is maybe one of his best yet.

We’ve been eating this for the last week at pretty much every opportunity. We had it with brisket this week. It is so easy to turn on the grill and do simple suppers with a meat, starch, and vegetable. I love summer cooking now that we have a grill! I don’t know how I lasted so long without one. 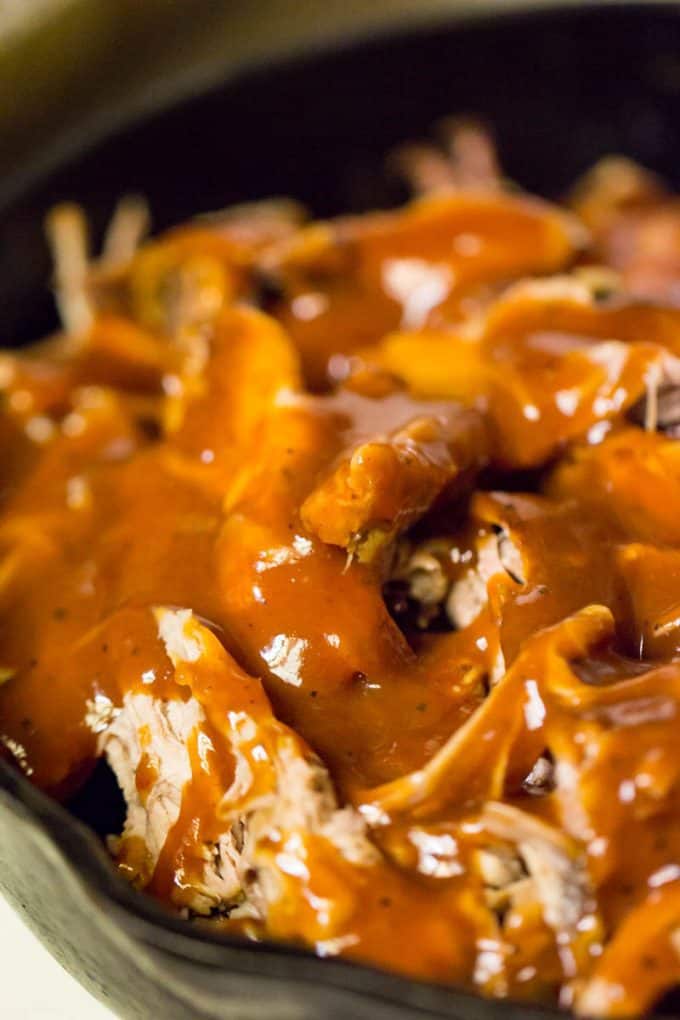 We also had it with chicken and pork chops too! Any excuse to whip out this stuff, and I’m taking it. It is slightly spicy, but only for flavor, not for the sake of heat itself. 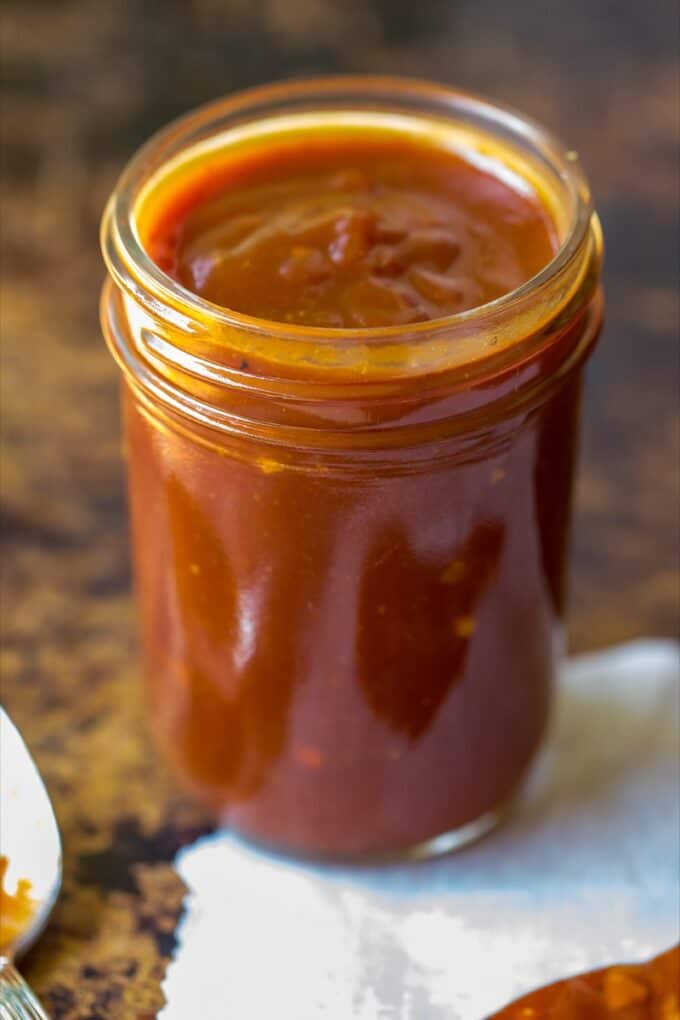 My husband came up with this great and easy to make barbecue sauce recipe originally, and I love it as is, which is the way the kids love it too. We’re always open to variations though because variety is the spice of life, right? So, I just wanted to revisit the recipe and add some options and ideas about making a great homemade barbecue sauce.

Tomato based barbecue sauces go well on any type of meat, chicken, beef, pork, even fish and veggies. The two things that really define a good barbecue sauce though are a bit sweet and touch of tang. Some would say heat is also important but that is really a matter of choice.

The vinegar component of a good barbecue sauce helps tenderize the meat and opens up the taste buds. While on the other side, the sweet and caramelized sugars in the sauce help offset any bitterness from the charring of the meat. With this recipe, there is a minimum 45 minutes amount of time recommended for simmering the sauce. However, just for the record, and since the vinegar helps preserve this sauce for use long after you made it, I recommend making a batch of it a day ahead or more.

The convenience of having it when you need it and not having to think about running to the store for a bottle of store bought sauce is worth its weight in gold. It will keep in your fridge for over a month because of the vinegar.

Also, the flavors just become more and more deep and developed as it has time to mix and mingle all the ingredients and create something greater than the sum of its parts. 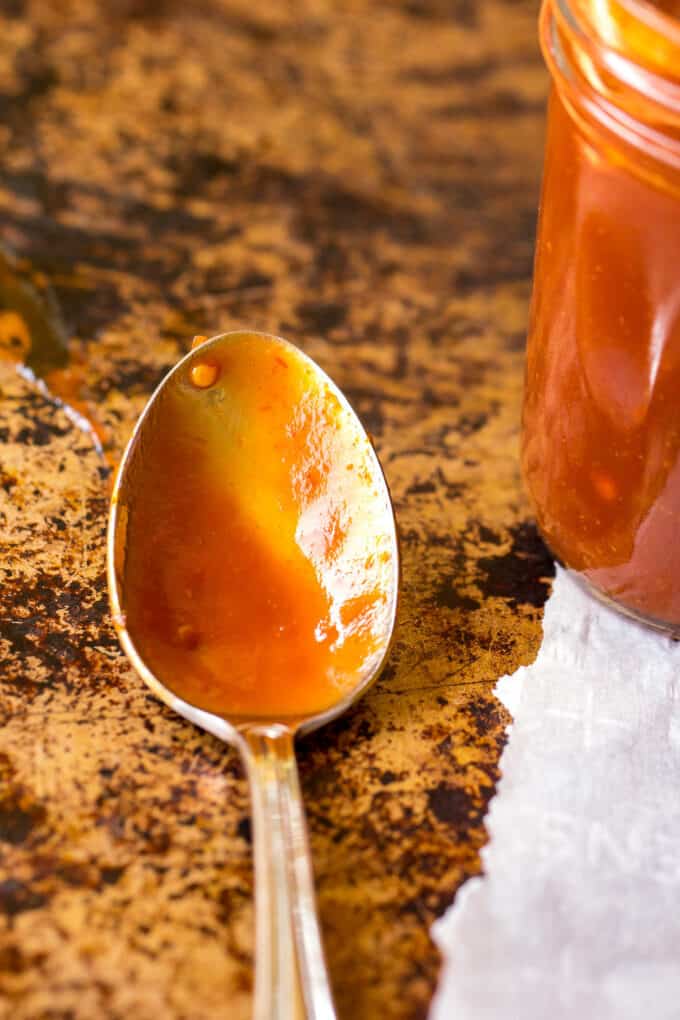 The touch of red pepper flakes in this recipe is enough to give just a bit of pep to the sauce but not burn. I know if the kids will eat it then it isn’t too spicy. However, if you like it hot, then feel free to add a bit more pepper flakes.

Just remember, the oils from the flakes will become more prominent as the sauce sits. So if it was too hot when you first tried it then you might want to give it away to the relative or friend that complains about things never being hot enough.

Also, if you want to add a bit of smoke and heat, then use a bit of smoked chili peppers. In Spanish they are called “chipotles”. You can just use a bit of sauce from a can of chipotles or chop some bits of chipotle into the sauce. Chipotles are easy to find usually in the Mexican foods section of the grocery store or sometimes in the canned foods aisle.

Chipotles are hot, and a little goes a long way. However, the bit of smoke that they add to the sauce is as good or better than any store bought “hickory smoked” or “mesquite smoked” version of barbecue sauce. (Most commercial chipotles are actually mesquite smoked by the way.) 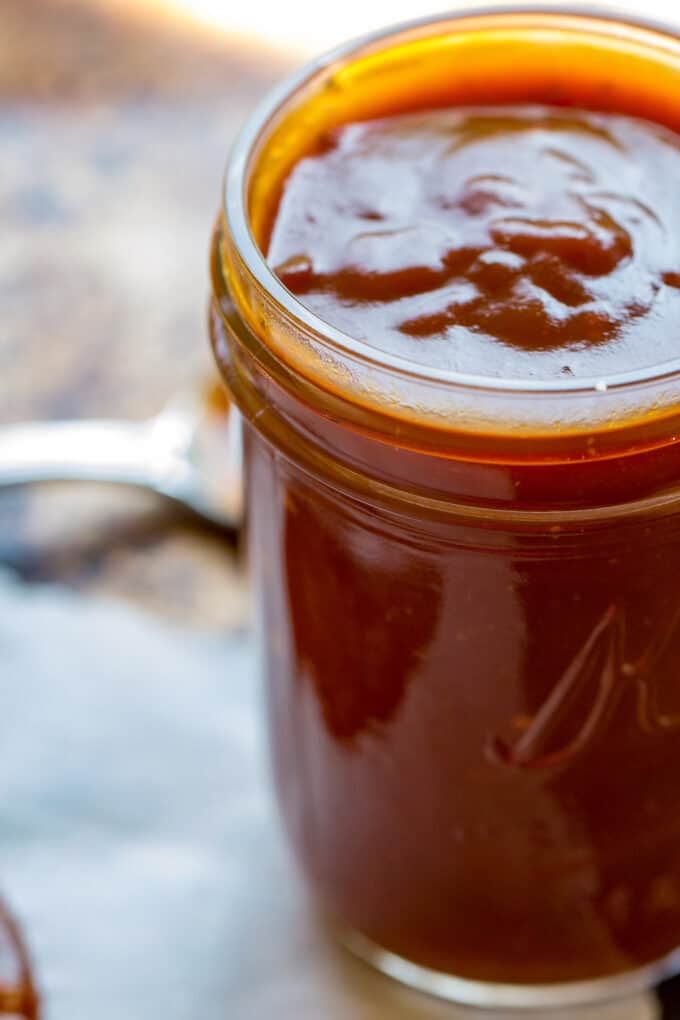 I love this homemade barbecue sauce because it is so versatile and I know when I serve food cooked with it then everyone is going to ask for second helpings.

If I don’t want to have to think too hard about what to make for dinner, or don’t have time to do anything overly ambitious, then it really is a great “go to” sauce. You can use it whether you are putting the food out on your Traeger smoker grill, or in your home oven, or any other cooking method, even pan fried or basted. 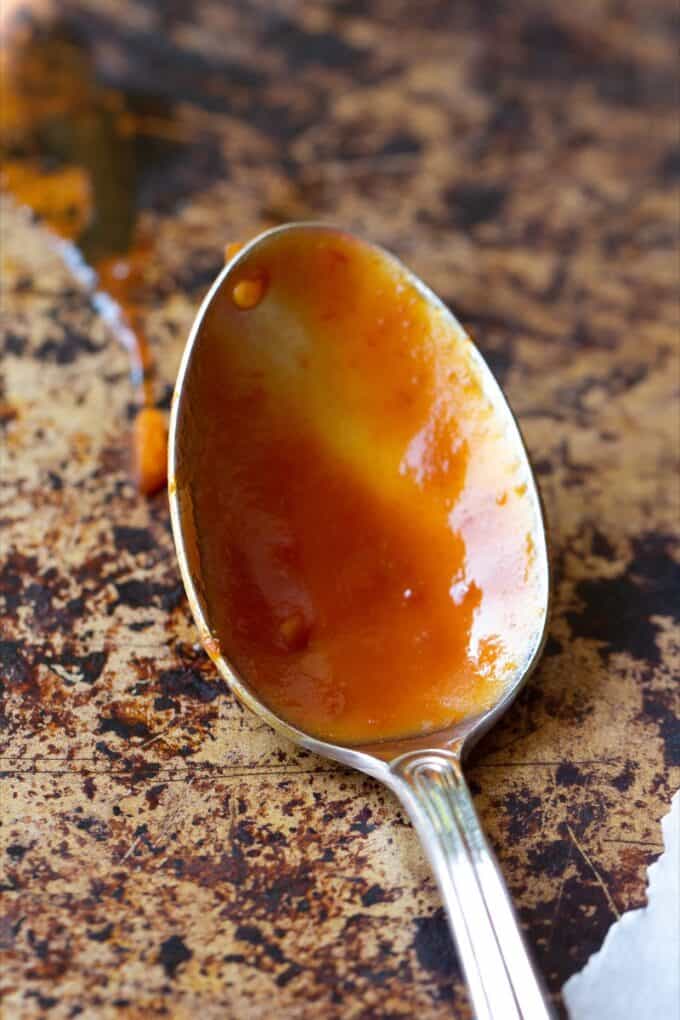 Great dishes that go with barbecue

The convenience of homemade barbecue sauce and the ease of using it whether you are outdoors on the grill or inside by the stove top or in the oven calls for easy recipes for side dishes to make while the barbecue cooks.

I suggest trying some of these: 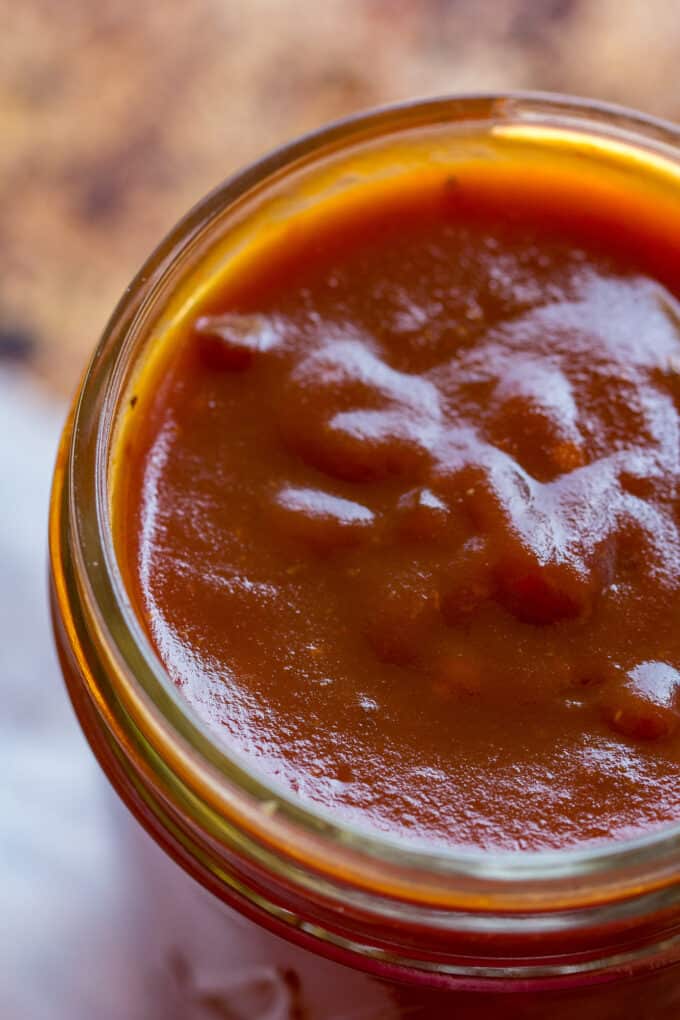 I’m having one of those weeks where I just.can’t.keep.up. And, oh yeah. Its only Monday! In the summer I hardly know which way is up, much less what day of the week it is.

Today I realized that we had a Kindergarten assessment appointment for Caleb 4 minutes before it was supposed to start. We were ALL still in our pajamas, and I had just got done scrubbing the kitchen down and was a gross, sweaty, disgusting mess.

I threw clothes on the baby and myself and we were ALL out the door in under 5 minutes. We made it before we were too embarrassingly late, and the assessment went off without a hitch. I can’t believe all of my boys are going to be in school this year! That is crazy!

I ran into another mom at the school who had an itty bitty two-month-old baby boy. She also has three girls, the oldest of which will be in Kindergarten this year.

We laughed and compared notes, because I also know the ins and outs of parenting four kids 5 and under. It is utter insanity. Chaos. But you will never feel more loved than when you have that many littles around you vying for your attention. It pays to be popular. Sometimes too popular!

Today has been one of those days for me when I just feel…defeated.

Then I made dinner which ZERO kids ate, so of course they were STARVING right before bed.

I was continuously kicking kids out of the kitchen the entire time I was cleaning up the dinner dishes and putting up a pint of pickles from the garden. I feel like I’m completely ignored sometimes, no matter how much I make them listen, correct them, teach them, does any of it sink in?

I know it does, but some days it feels like a losing battle.

The world is not your garbage can.
You cannot pee all over the floor.
Please don’t have water wars INSIDE the house.
No you cannot pull up the plants in my garden.
Don’t pick up your sister.
Don’t jump over your sister.
Don’t punch your brother.
Please stop using those balls to pretend you have boobs.
Private parts are private, and I don’t really want to hear all your conversations about your butt cracks and what the other new word for your penis is.
No, it is not okay to laugh about your brother being disciplined, especially if it was something you did that HE is getting in trouble for.
Tell the truth. Don’t lie.
Don’t ignore me when I’m talking to you.
No.more.video.games.
Yes that means the Wii too.
Go.OUTSIDE!
If you come inside you are doing chores.
Don’t leave the yard without permission, and don’t run the hose without a sprinkler attached.

That is one aspect of having many children that I didn’t anticipate. Constantly repeating myself.

I’m not actually usually being ignored, I just have many little ears that need practice listening, absorbing, and applying what they are hearing. Reminders are normal, and good. No one hears something once and then just DOES it. Do they?

I’m going to do a “day in the life” post one of these days. (Update…I did it!!) I’ve tried doing them before but I always scrap them because they feel so…faked to me. Like I catch myself thinking and considering what I want people to *think* a day in my life is actually like. Ick. So when I do it, it is going to be the real deal.

Either way, you should definitely make and try this awesome barbecue sauce. It’s going directly into my “keeper” file, and hopefully into yours too. 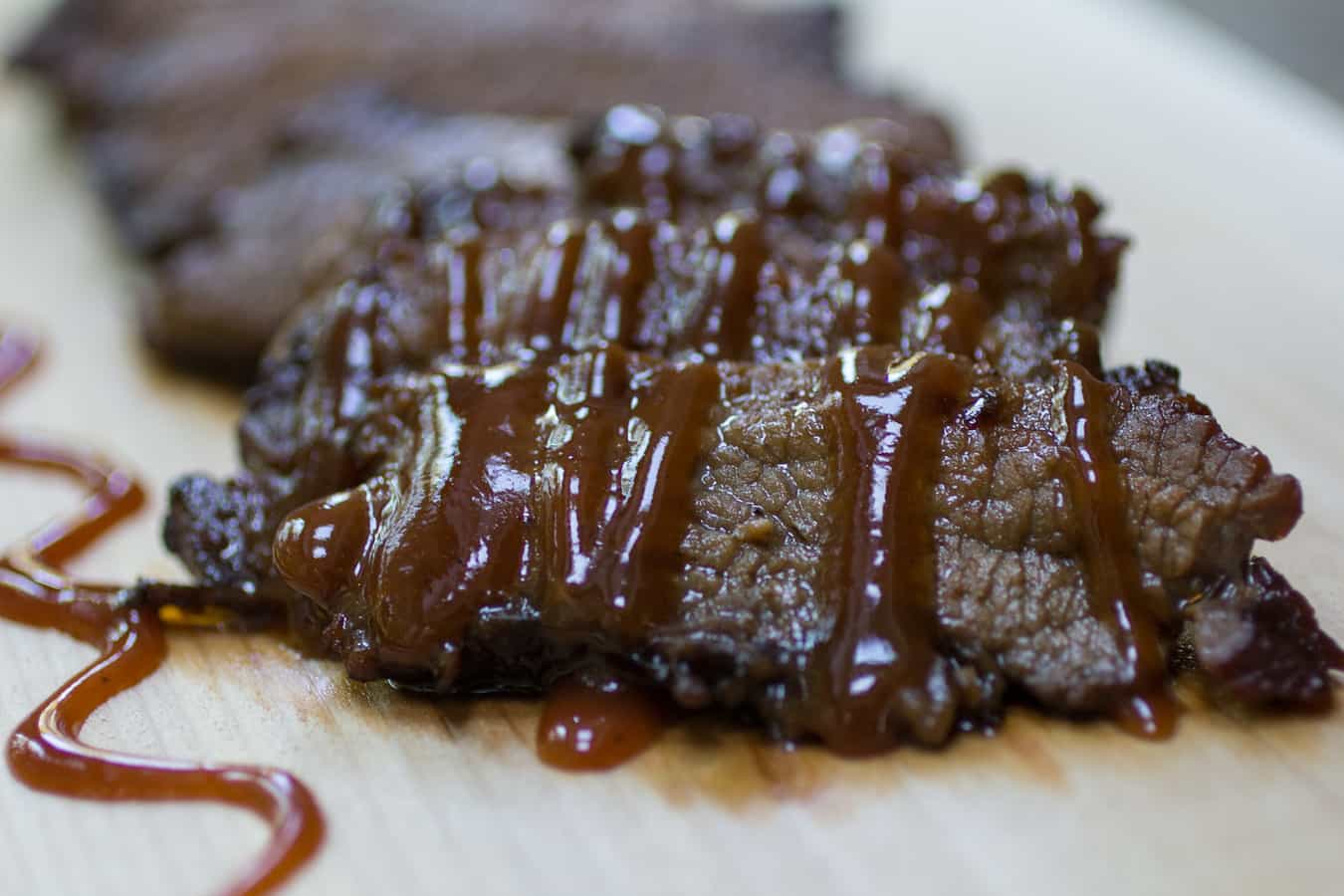 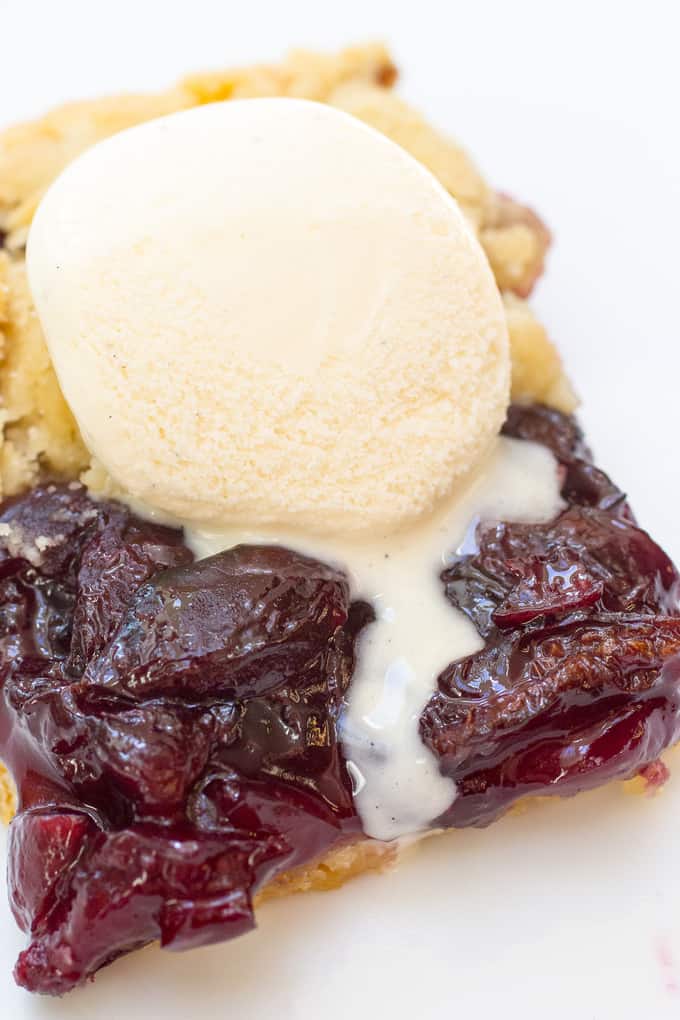 […] you’re looking for a barbecue sauce without any alcohol, check out this Homemade Barbecue Sauce as another […]

Traeger Chicken Wings Recipe » Or Whatever You Do

[…] onto the wings, but if you wanted a little extra kick I’d definitely recommend a good barbecue, teriyaki, or a classic Buffalo […]