As an Amazon Associate, we earn from qualifying purchases.
Jump to Recipe
9shares

If I only ever made Blackstone Loaded Hash Browns with Sausage and Egg on our griddle and that was it, I would still keep it around forever and always. These are fluffy scrambled eggs, sliced breakfast sausage, and copious amounts of cheese all sandwiched in-between diner-style hash browns.

(and why you NEED a gas griddle for your breakfast-making.)

If you think you like breakfast and don’t have a gas griddle, I’m going to go ahead and say you are doing it wrong.

A good gas griddle that you know well turns a full breakfast from a giant production involving all the dirty pans into a simple, efficient, delicious performance, of sorts.

If you’ve ever worked in the restaurant industry and get to see line cooks REALLY in the zone, you’ll know what I mean.

The typical gas griddle isn’t made of the same material that you’ll find in most kitchens, but the basics are really the same.

A large, flat surface that builds its own non-stick surface, just like a cast-iron pan does, by being seasoned and scraped/wiped after use, instead of washed with soap and water.

Make sure you wipe it and oil it lightly after use. If you don’t use it often, lay down some parchment paper over it as well. Otherwise, you can end up with a rusty mess.

If you DO end up with a rusty mess – don’t wheel your griddle out to the road with a free sign quite yet. You can re-season it and get cooking again by following my guide to re-seasoning your Blackstone.

What is the best kind of potatoes to use to make hash browns on the griddle?

If you want a roadside-diner-like experience, there’s only one answer to this question. It isn’t frozen and it isn’t fresh, either. It is dehydrated.

Crazy, I know. You wouldn’t think that a dehydrated potato would make such a delicious side dish, but it really does.

Just follow the directions on the box to rehydrate, and make SURE to drain them well. No one likes soggy hash browns.

How to make great loaded hash browns on the griddle

The key to making great hash browns on the Blackstone is patience. And probably – turn down your heat.

Most people run their griddles WAY too hot, and the food suffers for it.

For hash browns, that’s going to mean medium-low heat, lots of butter and oil, and then leave.them.alone. You only want to flip hashbrowns once.

That’s perfect for loaded or stuffed hashbrowns because you can cook the rest of your ingredients while the hashbrowns are taking their butter bath, on the other side of your griddle.

Then, once the eggs are scrambled, the sausage is browned, and the cheese is melted you just pile them on top of one half of the hash browns, cover with the other half, and serve.

More tips for great hash browns here in my other sausage-stuffed hash browns recipe. This one is a bit different in that it has scrambled eggs instead of a fried egg, and the cheese, eggs, and sausage is all inside of these bad boys.

What else can you serve with Blackstone Loaded Hash Browns?

All of the breakfast goodies! 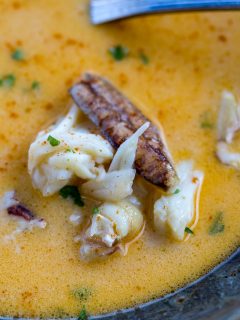