These Blackstone Stuffed Hash Browns are cooked until crisp on a gas griddle, stuffed with sausage and cheese, and then topped with bacon, cheese, and a fried egg (if that’s your thing), and are going to make all of your breakfast dreams come true.

These hash browns made my whole week. I knew I loved my Blackstone Griddle, but I didn’t know I loved it this much.

I spent a lot of time in diners as a teenager. My favorite part of those years was sitting for hours and hours on end over coffee with a rotating crowd of my friends, ordering breakfast and appetizers, figuring out who was having the bonfire, and who had room in their car for me to ride along.

One of the best parts of that breakfast bonanza is a big pile of perfectly crisp hash browns.

What tools do you need to make crispy hash browns

In theory, you could make these about a million different ways, but I’m here to tell you about 1 1/2 ways to make stuffed hashbrowns, so the other 999,999 1/2 you’ll have to test out yourselves.

All of the things I recommend here are linked down in the recipe card if you’d like to purchase them!

If you have a gas stove, you can get properly crisp hash browns if you have a decent cast iron skillet. All of you electric stove people, I’m not sure about you. You might be out of luck. I know I was, for so many years running electric stoves and just not really ever making hash browns here.

The best homemade hash browns I’ve ever had were made on a gas griddle.

These chunky hunks of metal get so searing hot that it would be impossible to NOT wind up with the perfect crisp hash brown crust.

You’ll need some LONG griddle spatulas. They come in handy with getting your turns right. I have a link to some good ones down in the recipe card below.

A griddler’s best friend is a well-stocked squeezy bottle stash. You want one for oil, in this case, but for other Blackstone recipes you’ll want to have a squeezy for water, and one for any sauces that you whip up to cook with your creations.

These are crucial if you are doing anything that includes melted ingredients. They’ll change your grilled cheese life

Get all of my BLACKSTONE RECIPES

How to RE-SEASON your Blackstone

Tips for crispy hash browns on the gas griddle

I know. I resisted for a long time, but dehydrated potatoes are going to give you MUCH better results than the frozen kind in almost all circumstances.

I got a giant box of these at Sam’s Club or Costco or online when I was stockpiling for a certain situation that shall not be named that started in March 2020 and I’m SO READY TO BE OVER ALREADY, and all of the sudden I like hash browns again.

Soak these bad boys according to package directions, and then drain them REALLY well. You won’t be sorry.

The first key is to have a well-seasoned griddle. You don’t want anything sticking here, so if your griddle is sketchy or sticky, I’d wait until you get your life sorted out on that front because the only thing worse than no hash browns is stuck-on ruined hash browns.

For my griddle, that means medium-high heat. A little on the high side. I don’t have a surface-thermometer (yet), so I can’t tell you exactly how hot you should have it, but it is pretty dang hot.

Don’t skimp on the butter and oil

While you don’t want greasy hash browns, you also can’t be too stingy if you want that signature crust.

Join the OWYD crew on Patreon!

This is an easy dish, but you have to do things in the right order, so buckle up, prep your ingredients, and light the griddle.

What should you serve with stuffed hash browns?

If you are making this, it could really encompass your entire breakfast. It includes all of MY favorite breakfast food groups.

If you are looking for something else to put out, I recommend a platter of fresh fruit or a fruit salad.

Want something sweet and full of carbs? Pancakes made with my homemade pancake mix will fit the bill.

I also have a killer blueberry muffin recipe that may need new pictures but don’t let that stop you. They are amazing!

Want some French Toast? Keep the griddle hot, or fire up your pellet grill and cook my Traeger French Toast. 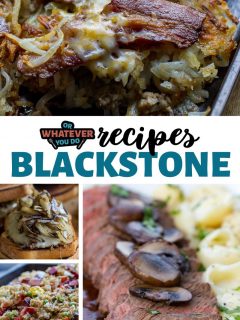 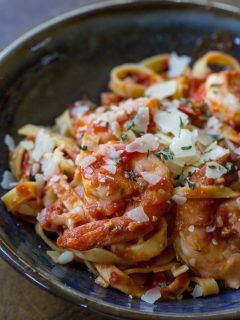