As an Amazon Associate, we earn from qualifying purchases.
170shares
Jump to Recipe

Traeger Smoked Pineapple-Glazed Ham adds a bit of extra bit of smokiness to your spiral cut ham, and then the pineapple glaze brings in some floral sweetness that subdues the natural saltiness of the ham.

This is similar to my other smoked ham recipe which is also worth a try!

A spiral cut ham generally has already been cured and cooked. So, really, you aren’t trying to cook the ham so much as heat it up. In this, you want to add some smoke to it by cooking on a pellet grill.

Smoking a pre-cooked ham means making sure the heat is low enough and the smoke is thick enough that you get the flavors in, but don’t overcook the ham. At the same time, the pineapple needs to glaze into the ham as it smokes. This is also referred to as a double-smoked ham.

A pellet grill works really well for this just because you have so much control over the temperature and the amount of smoke. If you just have a regular grill, you can still pull it off too. Just make sure to get wood chips and soak them for a while before you put them on the coals, and keep the ham over indirect heat.

Which pellets should you use for smoked ham?

There are a lot of woods to choose from when it comes to pellets. Maple or hickory pellets are probably the most popular woods for smoking ham. With the sweet pineapple glaze though, you can take a walk on the wild side with something like mesquite too.

My theory on pellets is that whatever is in your grill is usually the “right” one to use. They really don’t make that big of a difference to the end result.

How to smoke a pre-cooked ham

Spiral hams you find in the grocery store are almost exclusively fully cooked and cured. You can find an uncooked spiral ham at the meat counter, but typically those need to be special ordered.

Just in case you aren’t familiar with “spiral cut”, that means the ham has a slice going through the ham that winds around the bone. It makes it easy and convenient to cut off equal portions. The spiral cut also allows the smoke to penetrate further into the meat too.

One drawback to having a pre-cut and pre-cooked spiral ham is that it means when you heat the ham up, then it is particularly easy to dry it out. So, one way to overcome that issue is a nice thick layer of glaze over the exterior.

The glaze helps seal in the juices and will help prevent the meat from drying out. Make sure you add it a few times, and paint it on thick!

The trick to smoking a pre-cooked ham is to keep the heat relatively low. The ham is already cooked, so if you have a smoker temp of about 225° to 250° then that will be enough to get the ham hot and give the smoke time to do its handiwork.

How to make pineapple glaze for ham

Smoked ham glaze serves a couple of purposes. First, of course, a glaze adds a bit of sweetness. With meat as salty as ham, sweetness does all the busy work to distract you from things tasting too salty.

Next, the glaze will also help keep the moisture in the ham instead of escaping quickly and turning everything too dry.

Finally, the glaze will spin the flavor off in an entirely unique direction. That is why people often use citrus like oranges or fruits like cherries to glaze hams. Pineapple makes a particularly wonderful companion to ham. (And pizza! But that’s an argument for another day.)

The smell of the pineapple glaze will probably bring the whole neighborhood knocking on the door to see what’s for dinner. You might want to lock the door to prevent them from just taking the liberty of walking in unannounced.

When you are smoking the ham, you might also want to have a pan with some water in the smoker to keep the humidity high. The extra moisture in the smoker also helps the ham from drying out.

Make sure you reserve some of the glaze, and don’t use all of it at once. A handy tip is to use a third to coat the ham. Then use another third to baste on while it is cooking, and finally use the last third about 10 minutes prior to pulling it from the smoker.

If you still have some left after that, then just set it out so people can spoon some onto their plated slices.

Use up that leftover ham in these great ham recipes!

The smoked ham with pineapple glaze creates a dish you could almost call ham candy. If you like it, then you might want to try some of my other ham recipes if you have some leftovers to use… 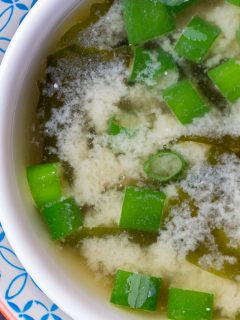 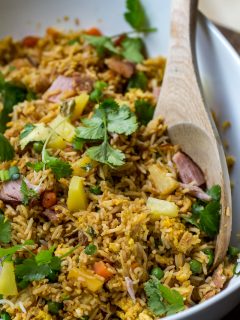