As an Amazon Associate, we earn from qualifying purchases.
1244shares
Jump to Recipe 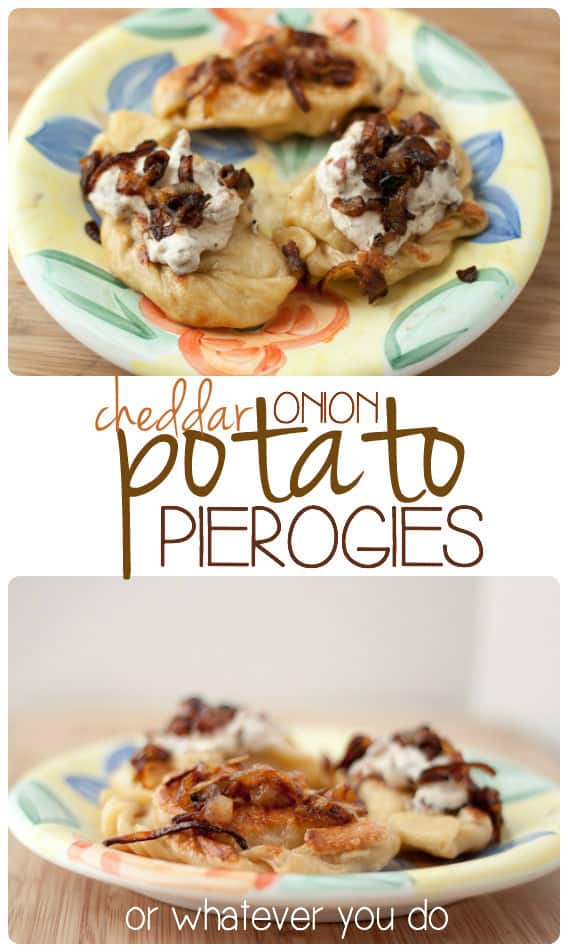 I am not going to lie to you guys. These caramelized onion, cheddar, and potato pierogies are no joke. They are best attempted with at LEAST one other person helping you. Assembly line style is best. If you can tackle it, the end result is really, really, really worth the extra effort. They are amazing.

At the end of making these I was too exhausted to enjoy them properly. How much that has to do with being 6 months pregnant and also dealing with all four of my kids during the process I will leave up to you to decide. They certainly CAN be done alone. I’ll never do it again, by myself, but you might be tougher than I am.

The magic happened when I left the boiled but not sautéed pierogies in the fridge for a few days, and then fried them up and topped them with the sour cream, bacon, and even MORE caramelized onions. Then ate them.

That, my friends. That changed my mind. That made me think that the hours of work WAS worth it. No frozen, store-bought, mass produced product can compare to these. It isn’t possible. Maybe a restaurant version could, but I haven’t seen them on many menus in my area.

I got the base recipe from Pinterest, of course, courtesy of My Gourmet Connection. Please check them out! They have some wonderful stuff going on at that site. Love it!

First things first…get your large pot of water boiling and your potatoes peeled and ready to go in.

Start out mixing up your dough by placing the flour, eggs, sour cream, and 1/2 cup of water into your mixer. Run it until it is mostly combined. 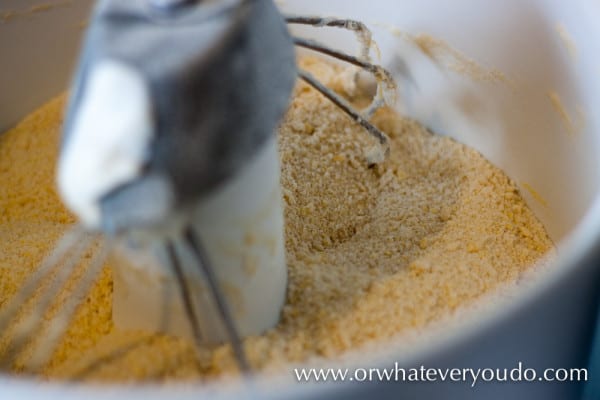 Now slowly add the rest of the water and mix until a ball of dough forms. Turn the dough out onto a floured counter and knead it until it is soft and slightly sticky, or about 4 minutes. Wrap it in plastic wrap that has been sprayed with non-stick spray and let it rest for 30 minutes. 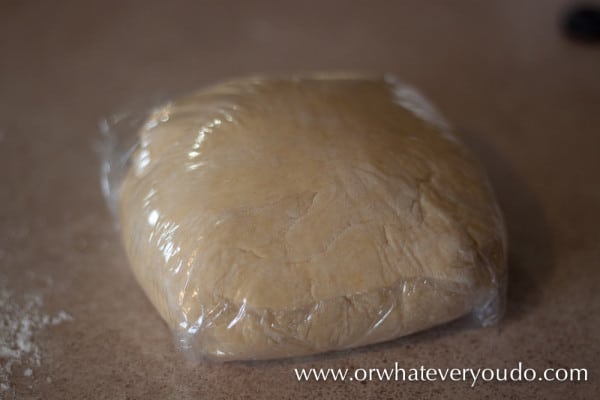 While that is resting, start your onions by placing 1/2 stick of butter and 1 large sweet onion, sliced in half and then in half rings, in your saute pan over medium-low heat.

Let your onions caramelize slowly, stirring every now and then, until they are golden brown and delicious. Remove 1/3 of the onions and set aside for the sauce.

When the potatoes are done boiling and are fork tender, drain them well and return them to the pan over low heat, stirring frequently, to cook out the remaining water that lingers after draining.

It should only take 3-4 minutes over low heat. You will start to see when the water is mostly gone. Next mash the potatoes with a potato masher and mix in the onion/butter mixture as well as your cheese. Taste this and add salt to taste. 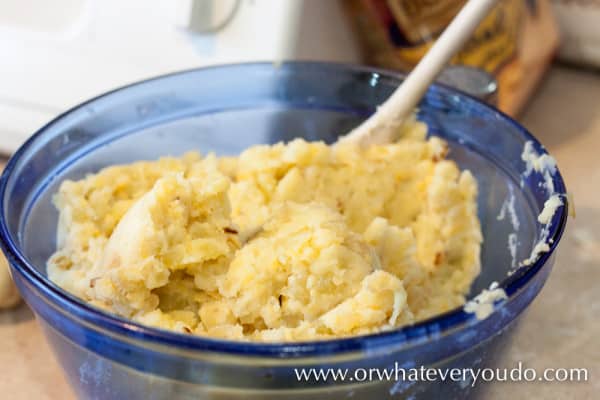 Set aside your potatoes and start further prepping the dough by pinching off small 1 inch balls of dough, and rolling into balls. Feel free to use some flour to help with the stickiness.

Next roll out each ball into a flat disc, about 1/4 inch in thickness. 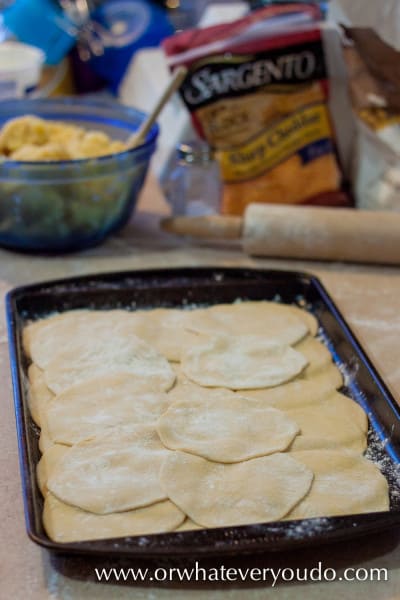 Once they are all rolled out, get another large pan of well-salted water boiling, and start filling the dough. It’ll take 2-3 TBSP of filling for each one. Hold the dough in your hand, place the filling in, fold over the other half of the dough, and either pinch or slightly roll the dough up starting on one end and working your way down to the other, ensuring a good seal so you don’t have filling leaking out into your water.

The photo below shows dough closed off using a fold over and pinch method. Later on in the process I switched to a rolling closed method. I found that they both stayed shut equally as well (if your dough is REALLY well floured, slightly wet your fingers and damped the inside seams to help seal it shut), but the rolled version which you see in the finished product shots looked prettier. 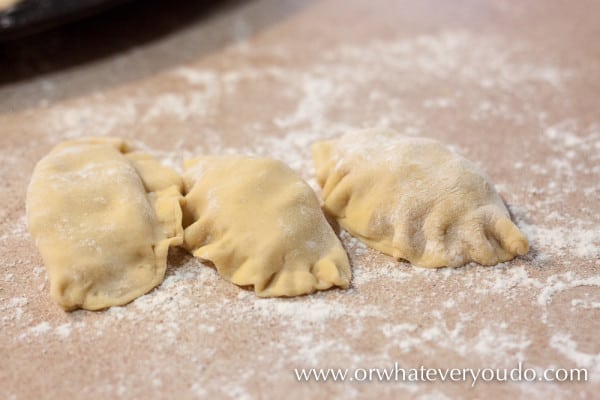 Once your water is boiling, places 4-6 sealed piergoies into the water and boil for 2-3 minutes past when they float. 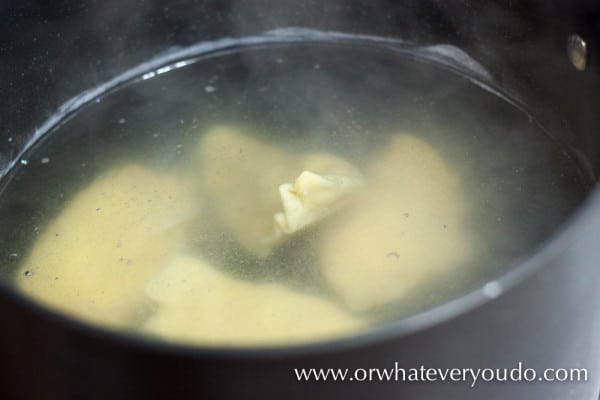 Remove from the water and place on a towel to drain. Keep sealing and boiling in batches until they are all done. 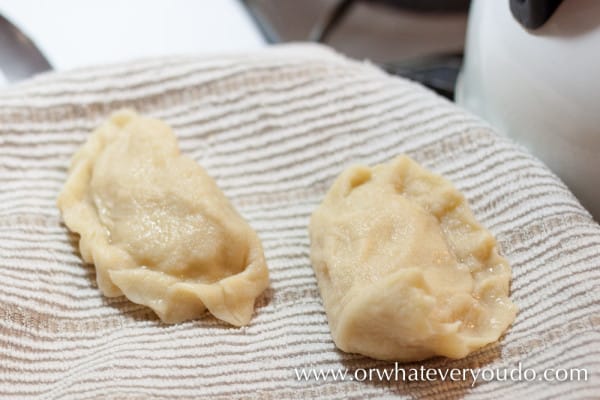 When they are doing being boiled, melt some butter in a saute pan and lightly fry on both sides until golden brown. 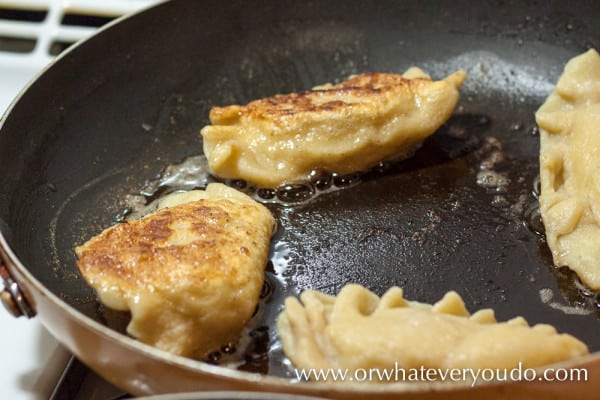 Top with a mixture of sour cream, bacon, and the caramelized onion/butter that  you set aside. 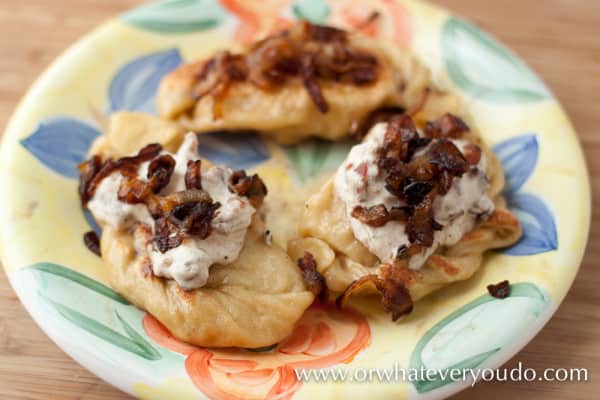 If you prefer, they were equally as good with only the caramelized onions on top. 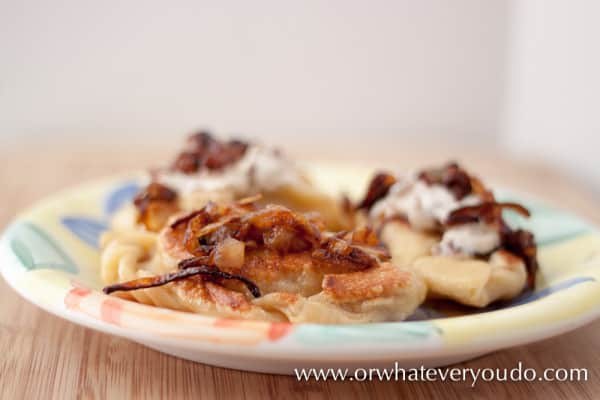 I’m tired just remembering all of that! Do you see how it would be easier to have another set of hands (or two more sets?). Makes all that rolling into balls, rolling into discs, and the filling/sealing go a LOT faster.

Nutrition data provided here is only an estimate. If you are tracking these things for medical purposes please consult an outside, trusted source. Thanks! 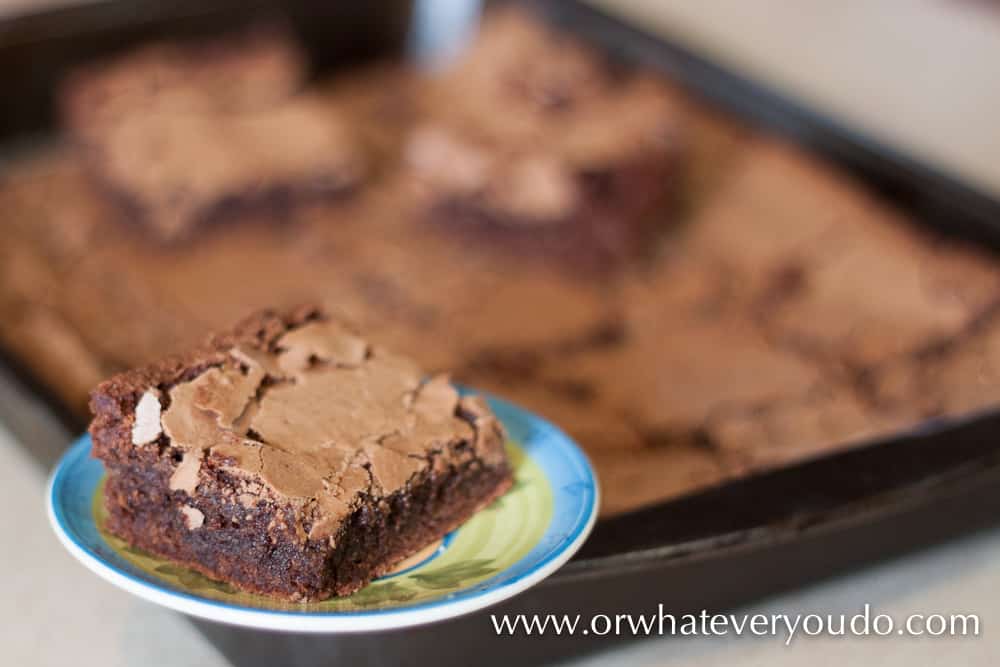 […] Caramelized Onion, Cheddar and Potato Pierogies from Or Whatever You Do […]

11 Leftover Mashed Potato Recipes - Or Whatever You Do

I used to make hundreds of perogies with my Mom and we always rolled the dough flat then cut out rounds with a glass or cookie cutter.

Pierogies are one of my all time favorite things to eat. I just recently made them for the first time, and loved how tasty they were. Definitely worth all the hard work!!!