Skip to Content
As an Amazon Associate, we earn from qualifying purchases. This site contains affiliate links. 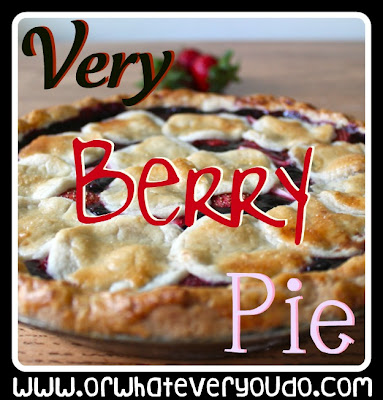 First I’d like to extend my most sincere gratitude to all of our service members, past and present. Both of my Grandfathers served in WWII, my father-in-law in Vietnam. My own husband, before I met him, served in the Navy. The sacrifice that the armed forces and their families make for our country will never stop amazing me. Thank you, all, for your service. Thank you to those who have made the ultimate sacrifice for my freedom, and my children’s freedom. You are all what make this country great. I pray for your peace, and for comfort for the friends and loved ones that were left behind. I will never forget. 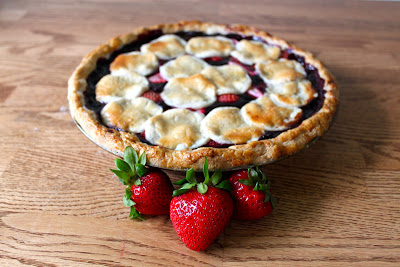 I really liked this pie.  My husband liked it even more than I did.  It would be great for the 4th of July especially if served with some vanilla ice cream or whipped cream! Go Red/White/Blue! Hey…it beats jello, right?

It didn’t set up super stiff, so if you like that sort of thing you might want to use a more tried and true recipe that is a bit more traditional. I just kind of threw stuff together. In case I haven’t told you yet (haha!), I am moving in 16 days. That means my freezer stash must be cleaned out. I had some blackberries from last year’s harvest, a large bag of blueberries in there, and also half a brick of lard. What else can one make with those items? Pie! Of course.

This is not going to be an exact step-by-step, exact measurements listed in order type of recipe tonight. I’m going to give you the play-by-play. If you are brave, bake away. If not, there are tons of really good, kitchen tested, beautifully written recipes out there for you!

I started out by tossing about 3 cups of blackberries and 3 or 4 cups of blueberries in a sauce pot. I dumped about 1.5-2 cups of sugar in, about 1 Tbsp vanilla, and about 4 Tbsp cornstarch in with it, and stirred well. I heated that over medium low heat until it was bubbling and delicious. Then I tasted it, and added some more sugar as well as about 1/8 cup lime juice. That acid really does wonders to berries. It really brightens them up a bit and adds to the overall flavor. If it doesn’t seem thick enough for you, feel free to make a little cornstarch slurry and add in some more. It does firm up a bit once its refrigerated, so keep that in mind.

For my crust I used the basic recipe on the side of the lard box. Normally, I like to use a mixture of butter and lard, but I needed to use this up. I must say I prefer the butter/lard mixture crust by far over the lard only. Butter adds a flavor to it that lard just can’t compete with. The texture was great, and it turned out pretty, but the flavor was lacking. There is a great recipe HERE from Christina Marsigliese.
Its basically the method I use, but instead of shortening I use lard. I *would* use shortening, but last pie season we were still staying away from soy-based oils for my 2nd son, including shortening. You use what you prefer.

So form the crust in the pan when its been thoroughly chilled, dump in the berry mixture, cut up some strawberries that you have hanging out in your fridge needing to be used up, top with pie crust, brush lightly with a whole beaten egg until the top is damp but not puddled, and bake at 425 until the crust is golden brown. Wait as long as you possibly can, then cut and enjoy. I topped it with french vanilla whipped cream…from a can. Oh the shame! (the delicious shame!) 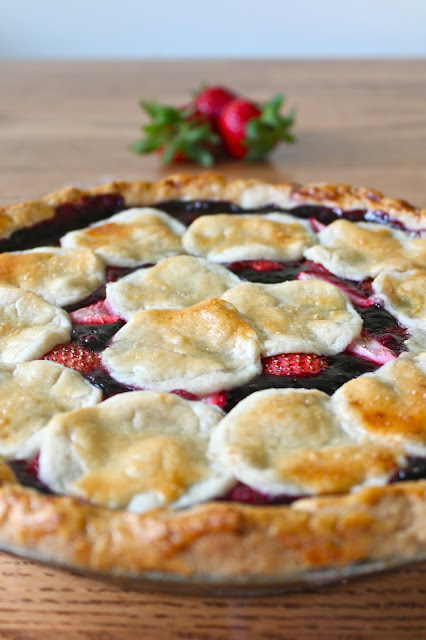 1. Using fresh berries is ideal for pie. It would have made for a much less soupy mixture. I had extra berry sauce, which is going to go on pancakes sometime this week.

2. I like the look and the taste of the cut out layered circles on the pie. Next time I will try little cut out flowers or something, but I’d already packed all my pretty baking things away including my cookie cutters!

3. What do you think of this? I see I have readers, but not many who comment. So if you have time, click below to say hello! I love hearing from people.

It is pie crust cut out in circles and arranged on top. ;)

I'm new to baking, but I love it. So, it may be a dumb question, but what is the top crust? It looks too light to be regular crust. Is it marshmallow?

Beautiful pie. I'm waiting for the cherries in my area.